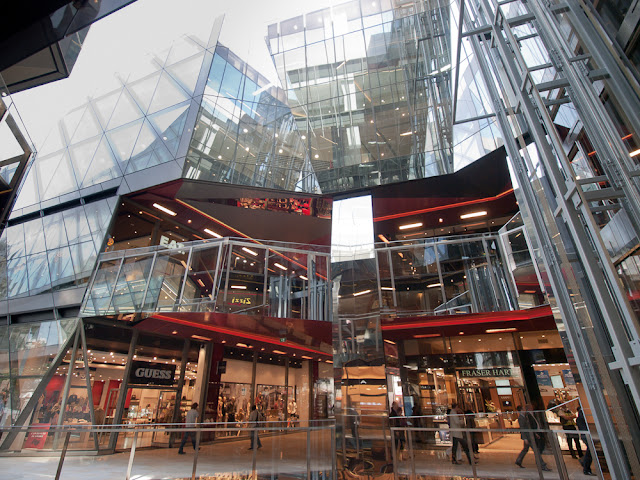 "As solid as the Bank of England" used to sum up just about everything in the architecture of  The City - massive, grey, somewhat dirty and still a bit smoke-scarred by WW2 bombing and not particularly "uplifting", but definitely "resilient".  I liked working in The City but I didn't enjoy the built environment very much. That's changed. New Change was the site of some typically massive offices once occupied by the Bank of England (I believe) - the bank building itself is a little further down the street.


New Change was knocked down and this year replaced by a steel and glass marvel that prays to the gods of shopping as well as commerce: the circulation of money rather than the careful stewardship thereof.


I like this 6 floor miracle of modern architecture in the new City of London. Interestingly, the whole structure seems to fade away into nothing when given certain kinds of photographic treatment. Is that also symbolic of our modern, post 1945 consumer-capitalism.........an economy based on consumption rather than solid investment?

Labels: architecture, the City of London