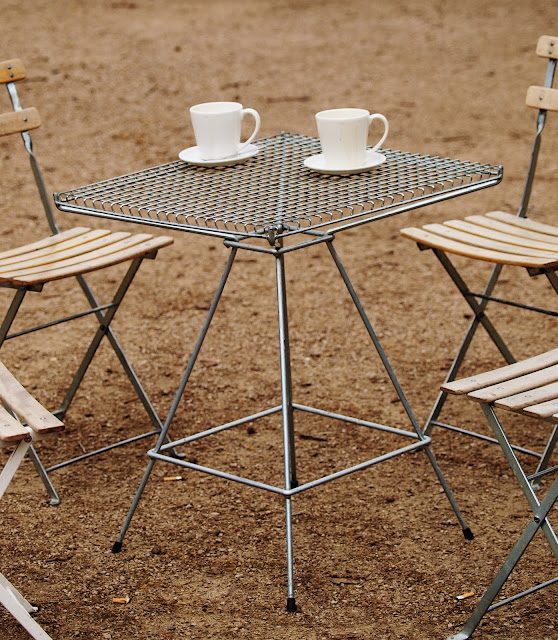 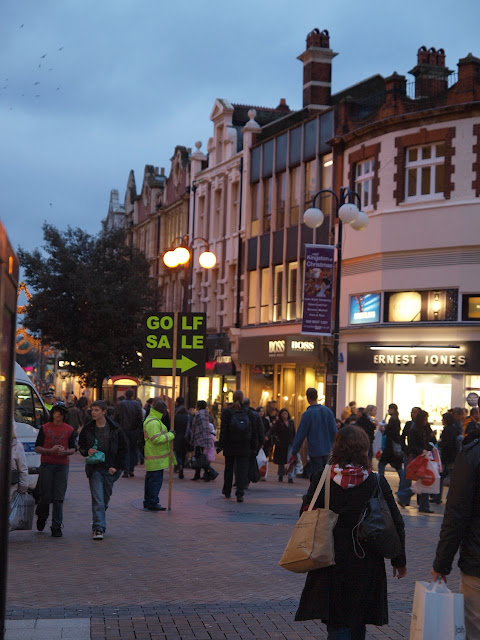 ...Hmmmm, well: some of you commented that the previous picture of three people enjoying their cup of tea outdoors was "too cold". Quite right. But just spare a thought for this chap. Day in day out, for roughly 365 days a year, minus the odd day when everything is closed, he advertises what seems to be a permanently on-going sale of golf equipment at knock-down prices. On the coldest days he stands on a tiny square of cardboard to insulate his feet. He is wrapped up so that his face is almost invisible and protected from the wind, and he stands stock still like a statue. Think about him sometimes. Does Tiger Woods even know he exists?

Posted by Chuckeroon at 11:31 4 comments 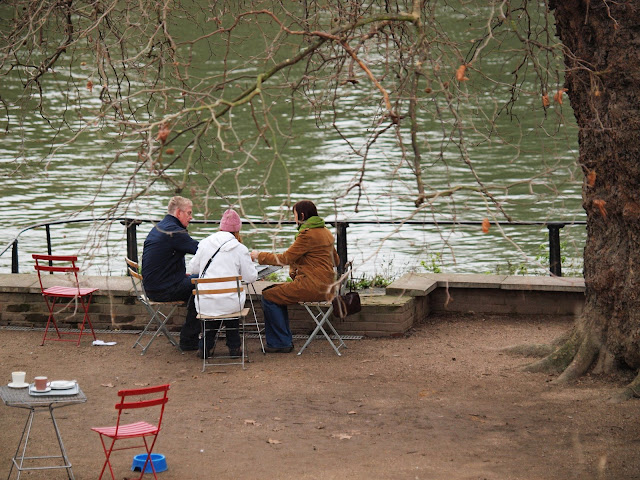 Posted by Chuckeroon at 10:47 8 comments 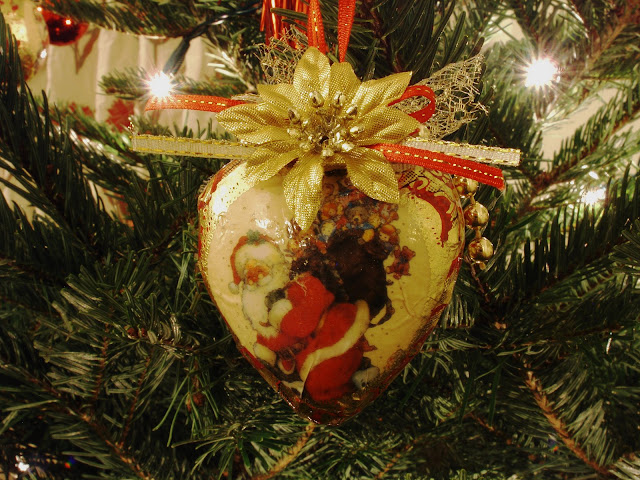 Posted by Chuckeroon at 20:35 8 comments 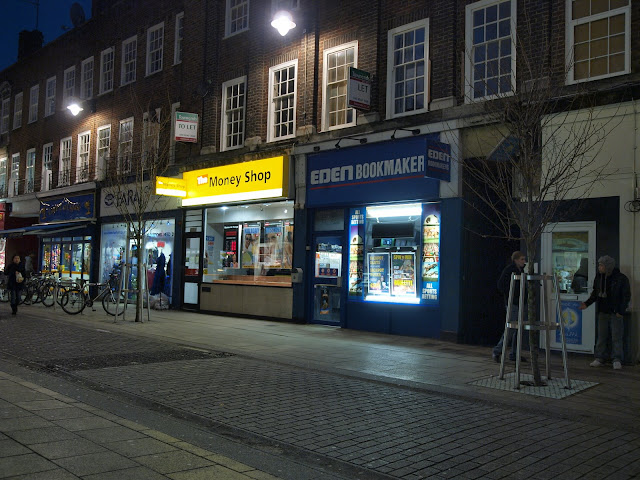 The former investment banker at the far right seems to have taken up a strategic hedging position.

Posted by Chuckeroon at 14:52 6 comments 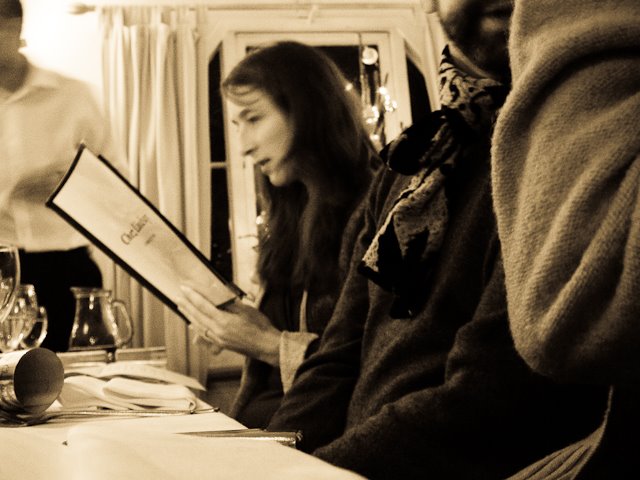 Never go to a restaurant without your beanbag, and always switch off the flash. Become anti-social and don't talk to anyone sitting around you. Get lost in your own little world. But don't stay like that for more than 2 minutes, or else no-one will invite to next year's party. Or - as Mrs 'roony says - "Put it away now, Dear".

Posted by Chuckeroon at 16:59 7 comments 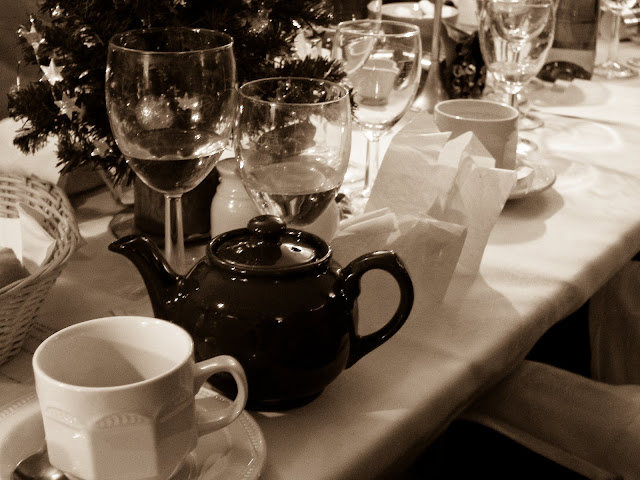 The party-animal needs plenty of stamina at this time of year; and not the least of those qualities is having strong eardrums that withstand the lively cacophony of chatter and a good larynx to ensure that your voice is heard above all. (I'm still hoarse, and mildly deaf, but it was a nice evening).

Camera: Olympus C7070 wz, the strap pulled tight against my rigid kneck and being held very still for longer than I care to remember: naturally, no flash.

Posted by Chuckeroon at 18:14 4 comments 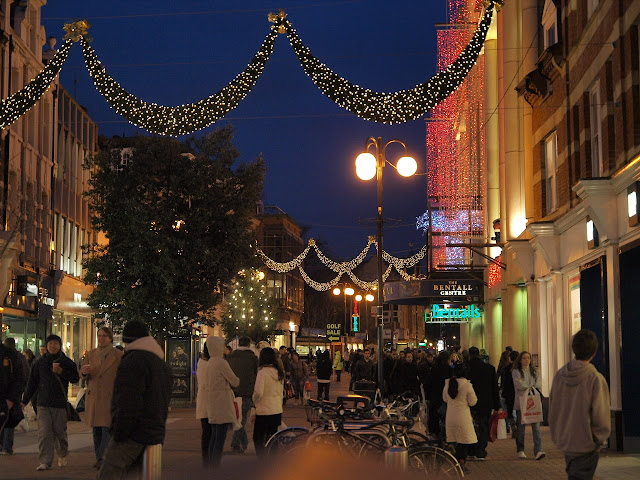 Photo from a country currently at war. I could add a few other things but that'll do for now.

Posted by Chuckeroon at 17:55 9 comments 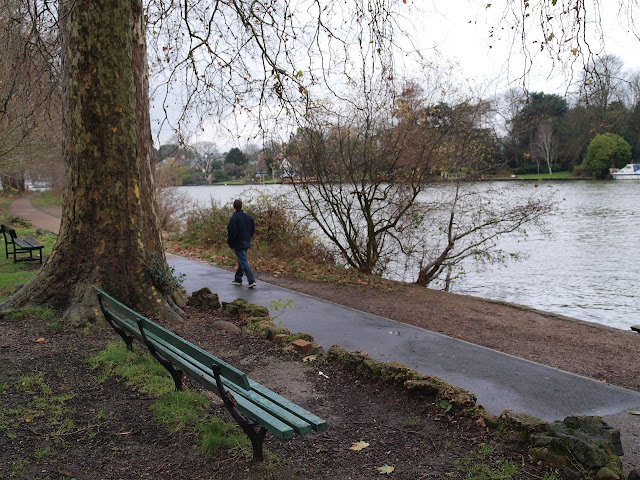 Compare the colours, the humidity, the temperature. Mull it over inside your head. Think of place and time and circumstance and how they affect what you do and who you are, and what you become. 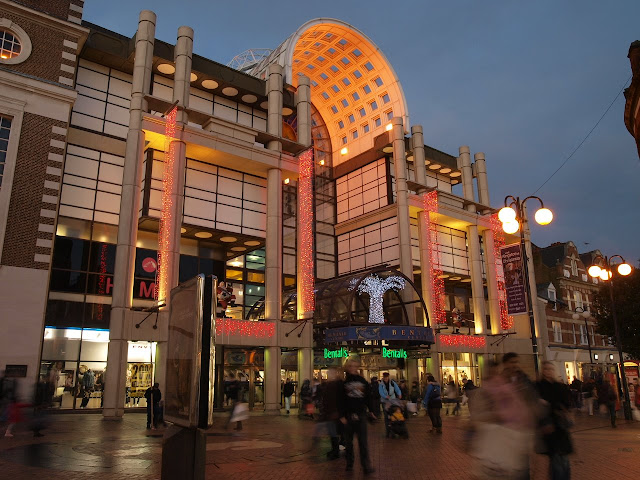 I've been trying to capture a number of things by after dark photography. It's cold, and being down by the Thames, it's damp. Added to that, my "Best Boy and Grip" has got himself a consulting contract that has taken him off to Turkey, so I'm on my own in the cold, damp dark. Worse still...............the Bar Fly is now bereft of support!!!!!

I've also been asked to compile a "coffee table photo book" and this is taking a fair bit of time at the moment.

So, because I'm not producing anything on Richmond upon Thames DP that is in the slightest bit engaging, annoying or amusing at the moment, I think I must step back for while and re-group and rebuild my strength. I'll be back, but I'm not sure when. Thanks to all of you who have been such good companions. 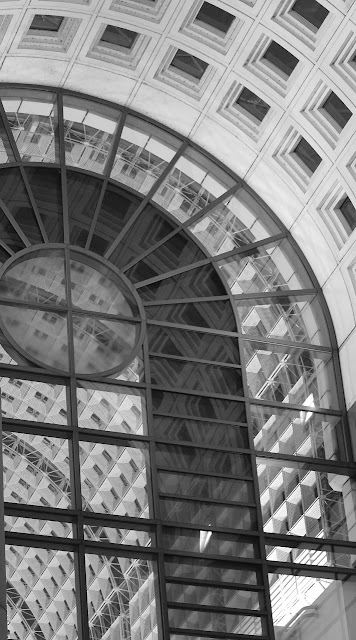 Posted by Chuckeroon at 18:05 3 comments 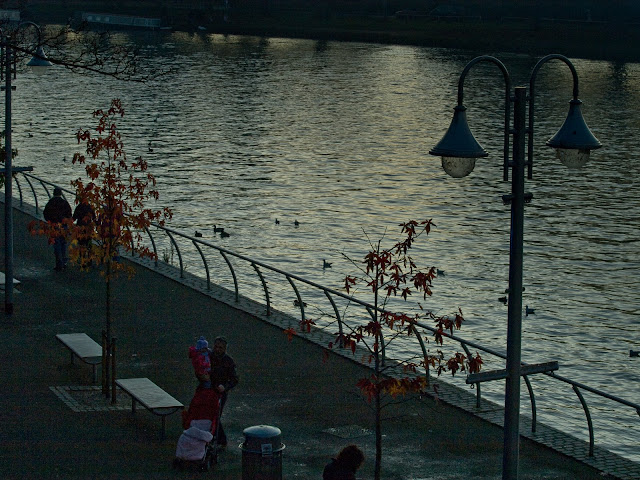 Shining light reflected by water - catching the eye and demanding attention, arresting my thought, uplifting: figures dressed colourfully but separate and alien patrolling dark asphalt: too early to illuminate, too late to expose: only nature is alarmingly bright in leaves that refuse to fall.

I just had to photograph this scene - but I can't work out I why it moved me so much.

Posted by Chuckeroon at 15:54 3 comments 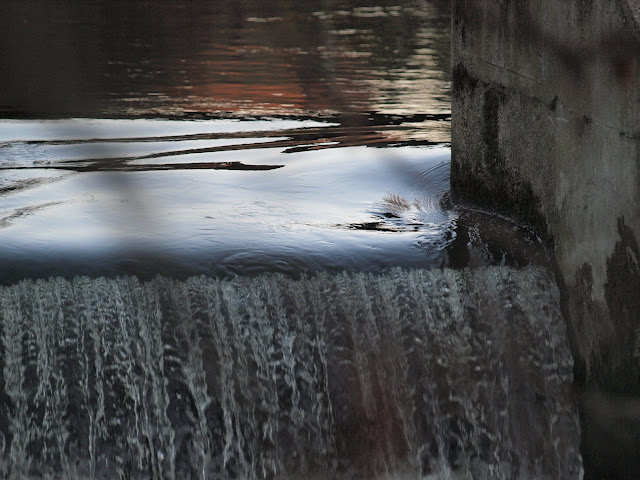 Lot's of dithering over this one: B&W or show off how it catches the late afternoon December sun? Should we admire the tints of the reddish brick houses reflected and the hint of the blue winter sky in the smoother water, or go for the remarkable tonality of the B&W print?

The Hogsmill is a fast flowing downland stream that's provided fresh water for millenia and then in later years power to drive industry. At this point it strikes the nose of an island and runs over a weir built for the watermill that stood there. It then gushes fast and hard into the Thames.

I love the way the ruffled water turns into a sort of thick treacly mass as it flows over the weir and then breaks into a mass of sprinkles and turns white.

It's just another snap in my series of attempts to catch the essence of the water flowing in the many streams around the area.

Posted by Chuckeroon at 19:25 7 comments 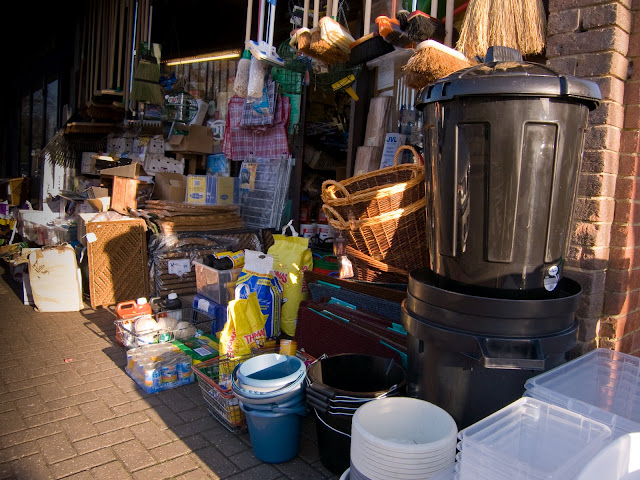 It all goes out first thing in the morning and it all goes back in last thing at night. What would we do without this shop and its dedicated owner?

This photo is a tribute to http://cergipontin.blogspot.com/2008/11/paris-14eme-western-affaires.html showing us a similar mainstay of society in Paris. Thank you "Cergie" for your frequent visits to that bane of La Belle France: L'Angleterre. ;-)

Posted by Chuckeroon at 18:12 3 comments 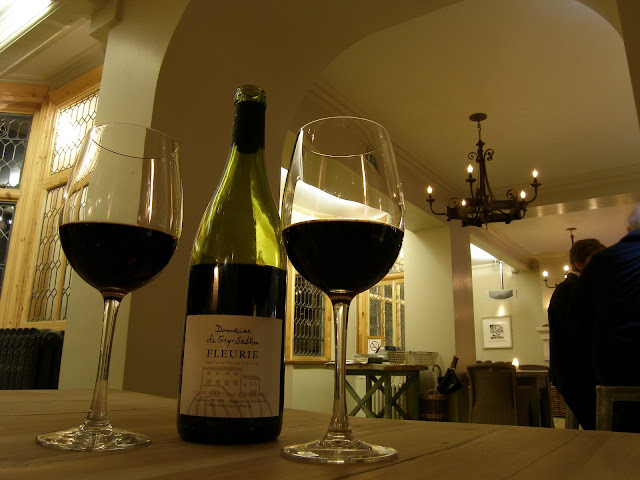 I was allowed out last night.

Posted by Chuckeroon at 17:23 8 comments 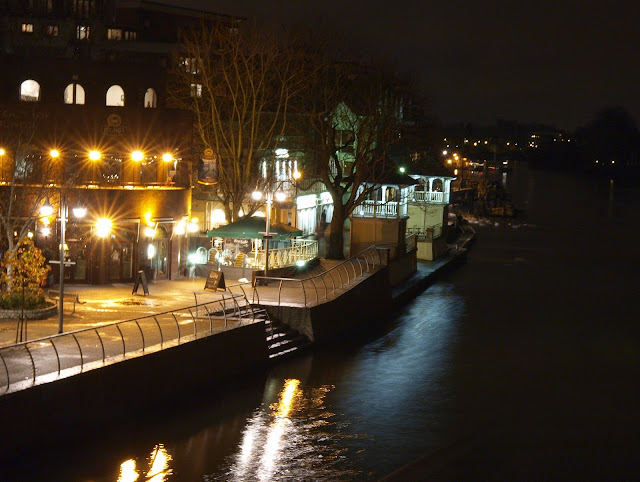 The dark river looks very forbidding and unattractive. The quayside is deserted, and the bright lights cry in vain trying to attract visitors to the restaurants and bars. Some will come a little later in the evening, but it's mid-week, and quite cold in that sort of damp unpleasant North-East Wind kind of way that you get used to if you are British.

If you are not sure what a North-East Wind is like, find the city of Hull on the map, and go there in winter. The wind blows straight out of the arctic and bites you in half. It's good for your moral fibre. Eskimos will understand.

Posted by Chuckeroon at 20:20 6 comments 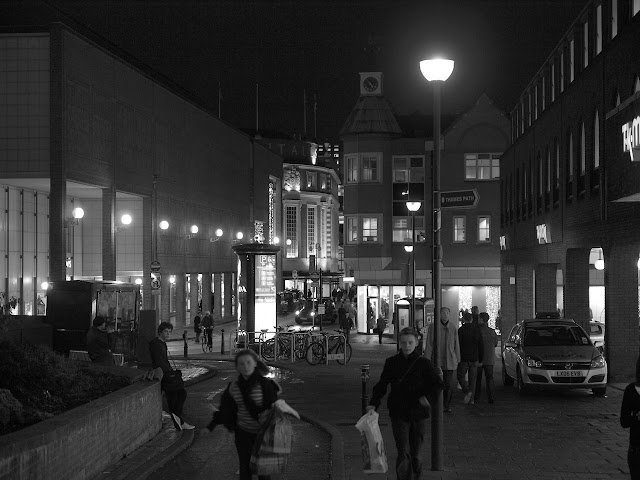 Just a snap looking from Kingston Bridge (one of the oldest bridge crossings over the Thames - even a Roman bridge? I must check it.) towards the centre. As you know I generally don't "do" people, but I like to show an ordinary street scene now and then. As a town with both a university and higher education colleges Kingston has a large population of youngsters around about. It's also a major retail shopping centre. The street scene reflects all this.

Posted by Chuckeroon at 15:40 2 comments 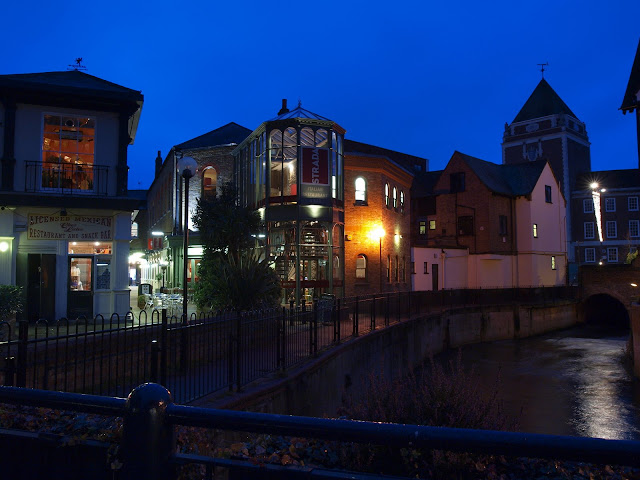 What's going on here? Taken at the "Blue Hour" of around sunset, the white balance has been corrected to render true whites in the lamp light but, as a result, it has picked out the high proportion of blue light in the spectrum cast by the sinking sun. Actually the sky looked very dark and overcast, so it was a bit of an "Isaac Newton Moment" to see the result of a simple tweak of the camera. J-W von Goethe would have rushed to write a whole new chapter of Colour Theory.

More important:
..........admire the way the light reflects on the fast flowing Hog's Mill - an ancient, gushing, powerful little stream that runs into the Thames at Kingston. See it flow under the dark arch of the very old "Claterne Bridge" (so called because of the noise of clattering mediaeval merchants' carts passing across).

..........admire the way that the old Thames riverside quay area at Kingston has been redevolped (as usual, these days) into a "leisure area".

..........looming behind is the mass of the 1930s Surrey County Council offices, and around about are the modernised remnants of Kingston's mediaeval past.

It's a pleasant area to inhabit. I hope that the threatening financial crisis, which will hit very hard in the London Area, doesn't lead to acres of empty, unwanted bars and restaurants. In that case I will have to take another even bluer image.

Posted by Chuckeroon at 17:46 7 comments