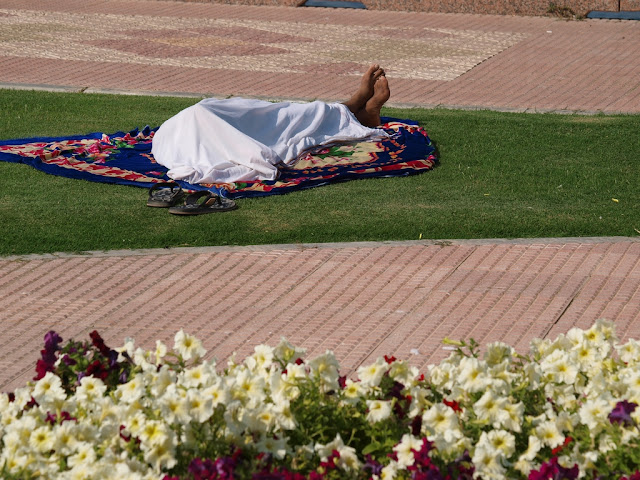 This isn't typical. The flowers and the nicely laid out public park are typical, but this is the only sleeper I ever saw. He obviously isn't worried about sunburn on his feet.

Posted by Chuckeroon at 12:01 4 comments 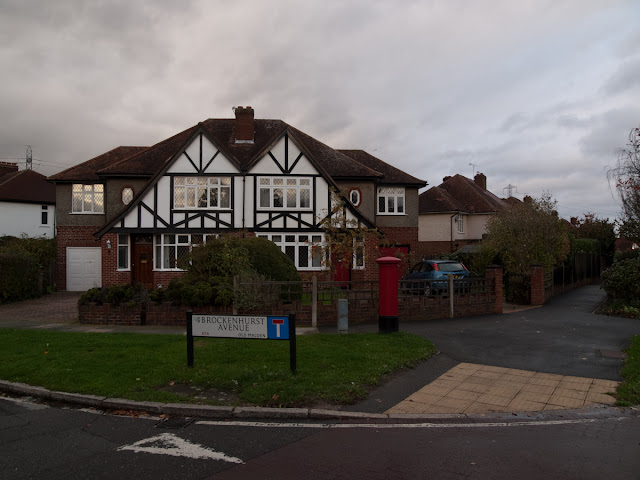 Posted by Chuckeroon at 10:05 1 comments 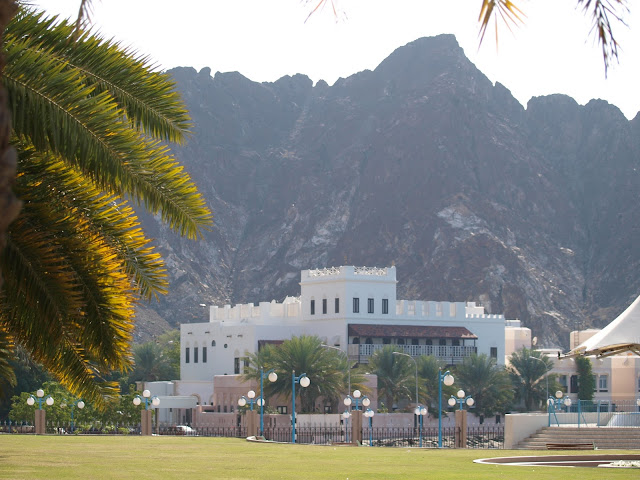 Now that I'm back in Richmond I thought I would play a little game making comparisons. It won't last long but it will give me time to "bed-in" again.
I like this house - or rather the two (white behind, brown in front). Unfortunately poor camera management means that the image is not as crisp and sharp as it should be. (I was experimenting and forgot to reset the camera, and perhaps I should have attached my polarising filter, but I was too lazy - "Oh, the heat, the heat, Carruthers. This damned eternal heat. Why did I ever sign up for this service?").
Anyway, these are two "patrician houses"; the small brown one carefully restored to celebrate the old style, and the one behind, in the typical Omani "fortress" style with what looks like a Portuguese style balcony, reflecting the 17th century Portuguese influences in Muscat - I'm guessing. I'm going to try and contrast them with similar houses here in Richmond.
The houses are in a tiny spot, called Kalbuh, close to the main harbour area called Mutrah.

Posted by Chuckeroon at 11:20 3 comments 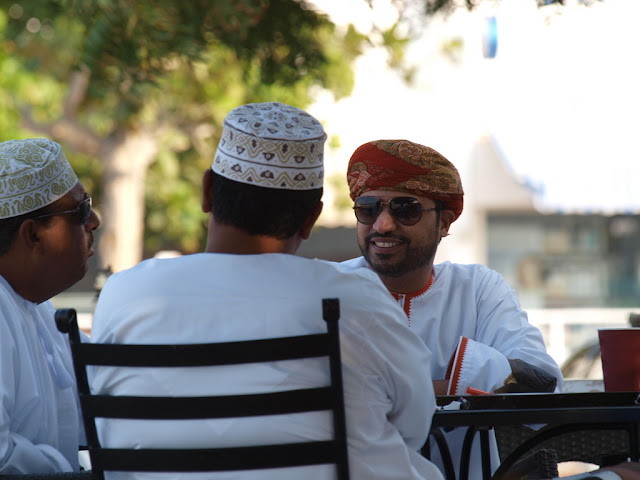 Posted by Chuckeroon at 15:23 6 comments 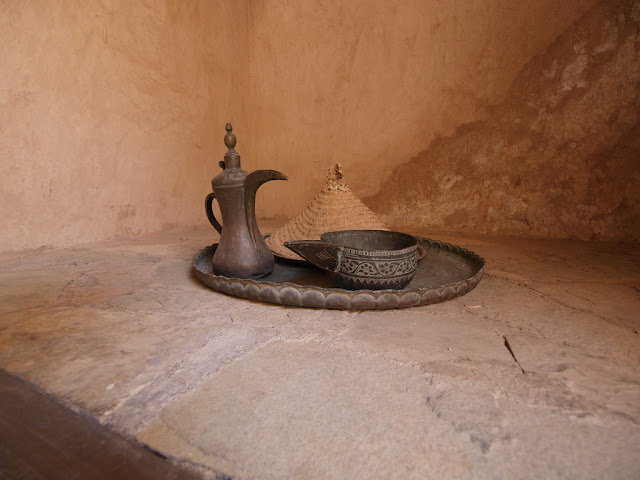 We're close to the end of Muscat Moments. There are only a few more days to run.

This pleasant tray of traditional coffee pot, bowl and wicker fly cover for plates of food is on display at the castle of Nakhal. Doesn't it look pretty?

Posted by Chuckeroon at 15:07 3 comments 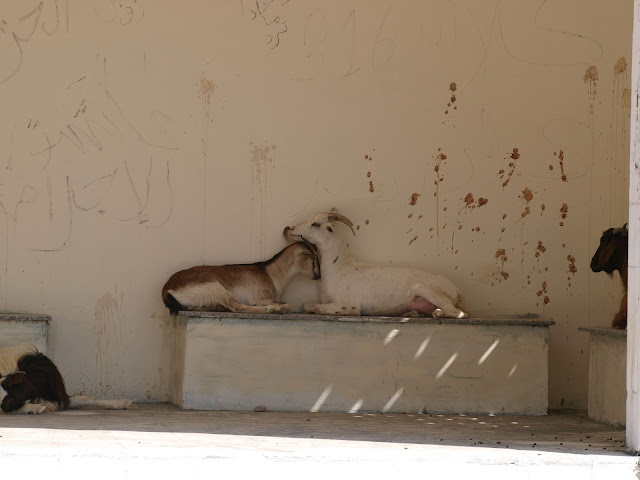 Goats seeking shade.  As we come down from the jebel back to the hot semi-desert low land plains we find an ingenious system of shelters for people waiting for taxis.  Along the highways that sweep past the villages there are shelters to provide shade. There are no buses as we understand them in Northern Europe, but taxis patrol the highways.  You can phone or just wait for a taxi to magically materialise.  This is afterall the land of Sindbad the Sailor and the Arabian Nights tales. The goats find these shelters extremely useful. Goats are not daft!!!  And goat's milk and meat are vey good.  And their hair makes nice garments and decorative knick-knacks. I like goats.

Posted by Chuckeroon at 13:43 4 comments 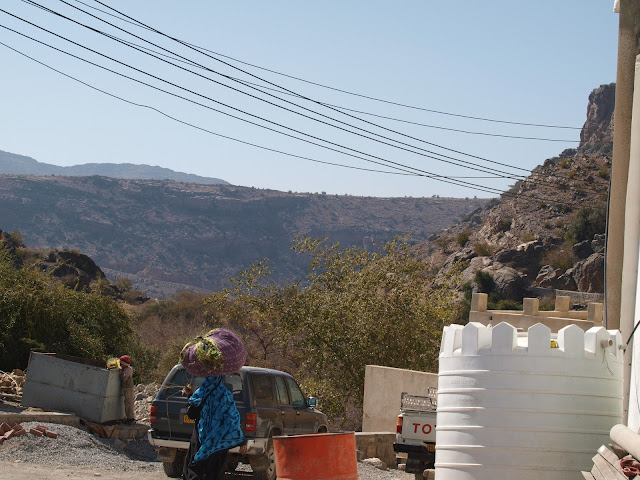 The last quick snap from the "jaunt in the jebel":  a village lady in colourful traditional clothes carries a bundle of crops on her head towards the aged 4.0 litrewhite Toyata pick-up. In the foreground is a white plastic water tank looking like a a typical Omani watch tower with its crenelations around the top.

Posted by Chuckeroon at 20:00 2 comments 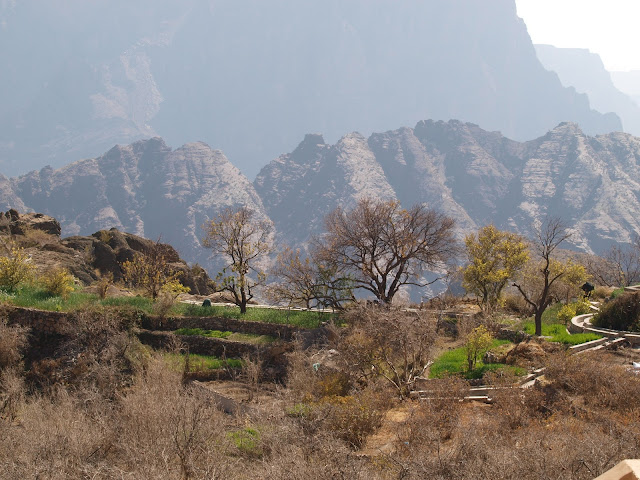 "A jaunt in the jebel - 2"...................a close up view of the terraces showing the thick, green crop. On the right the water distribution channels and in the background the harsh rocky crags and precipices of the mountain range.

Posted by Chuckeroon at 08:51 5 comments 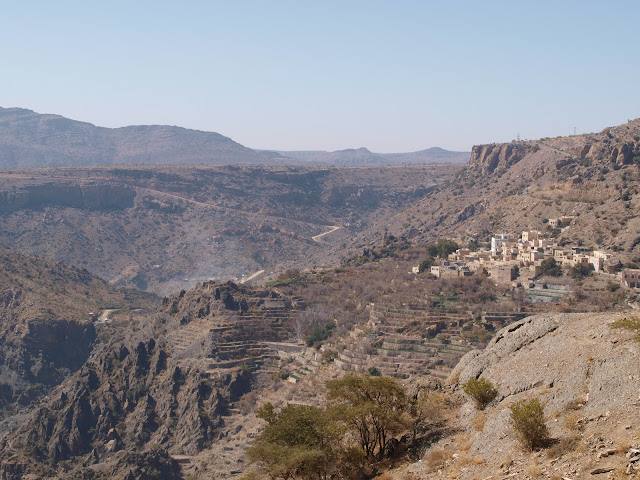 "A jaunt in the jebel"...........a village at around 2,200 meters high in the Jebel Akhdar (the Akhdar Mountain chain): over the years the villagers have laboriously constructed a huge series of terraces on which they grow their crops.  There is plentiful moisture and running water is distributed via an ingenious system of water channels that serve the terraces. Today, main sewerage and mains water pumping systems are being installed under the narrow alleys between the houses. Electricity comes via a chain of pylons built across the ridges and gulleys of the mountains. Mobile phone reception is perfect.

Posted by Chuckeroon at 07:41 4 comments 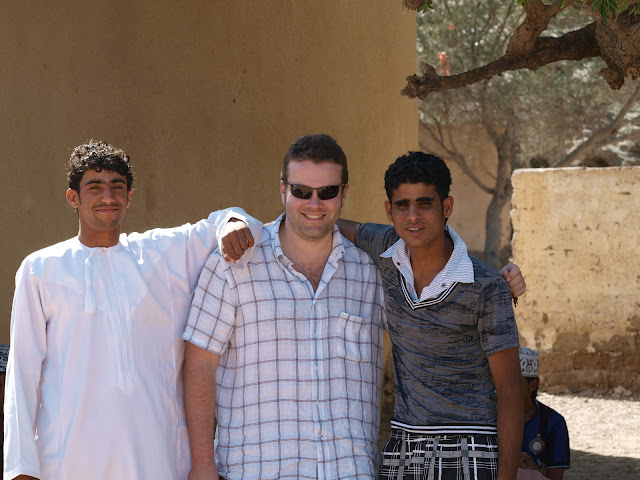 "The village at the end of the world"............my son brought his rock-hard Jeep across the desert from Dubai.......it's a lovely multi-lane highway built to the best standards.


However, this fishing village is accessible only by a rough-riding Jeep or by sea. But they have electricity and school and the road is maintained, if rough. They are by no means cut off, and a fishing skiff could quickly reach Muscat.


Omanis are friendly, outgoing seafarers and by tradition like contact with foreigners (provided you respect their pride as Omanis).  They graciously invited us to sip Omani coffee and eat dates - delicious sweet and sour/dates and coffee.  Over coffee we discussed international football, the cost of cars and the price of buying a wife.  There was a long contemplative silence after Christopher reckoned £500,000 as being the cost of a wife in England..........which then exploded into a loud burst of exceptionally raucous laughter and back slapping. After the usual photo-call we were graciously lead back to the Jeep and waved on our way.  Riding away in the Jeep we were thinking.........Hmmm, just like men all over the world!!!

Posted by Chuckeroon at 10:29 9 comments 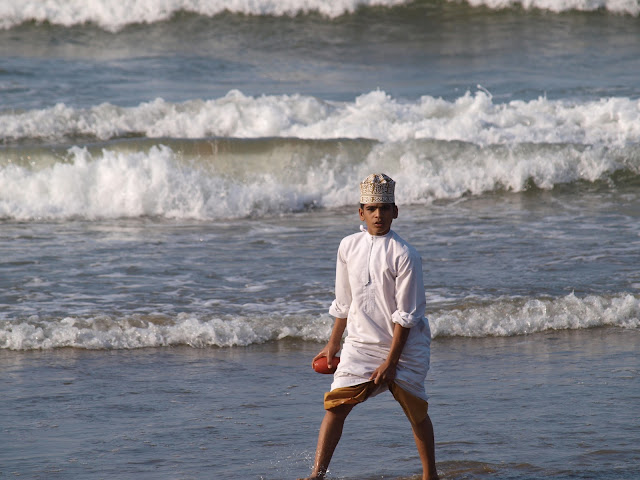 Posted by Chuckeroon at 05:45 3 comments 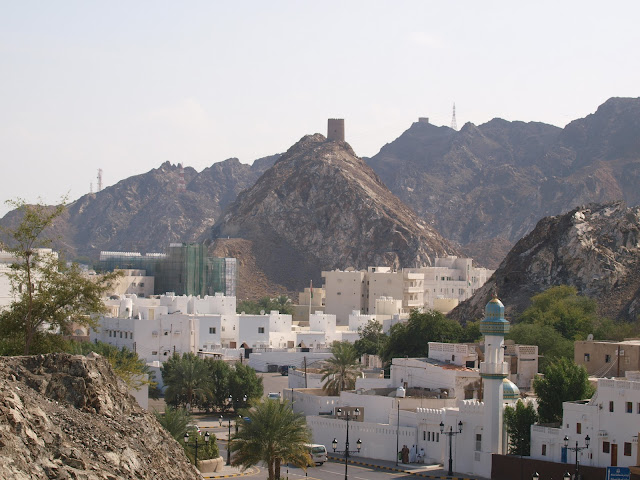 Looking down into Old Muscat from the old town gate fortifications. The buildings are not so "old" but the surroundings and site are impressive.  Today the watch towers vie with the mobile phone towers on the mountain peaks.  The Sultan has decreed that there should be no high rise buildings to spoil the views.  Muscat is a "low level" townscape - and very much better off for that.

Posted by Chuckeroon at 19:10 0 comments 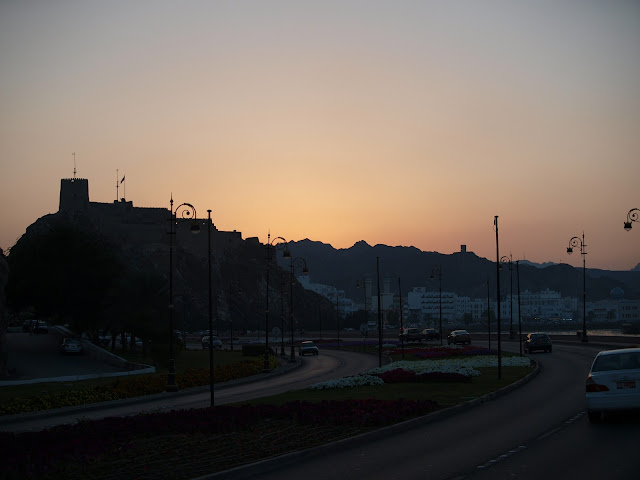 Sunset behind the mountains that cradle Mutrah, the port of Muscat. The fort and the watchtowers take on a special form.

Posted by Chuckeroon at 15:58 1 comments 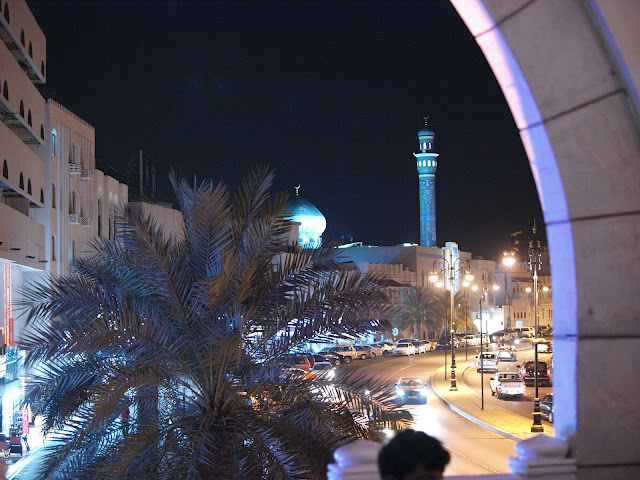 Night shot of the Corniche at Mutrah, the Port of Muscat.

Posted by Chuckeroon at 12:56 2 comments 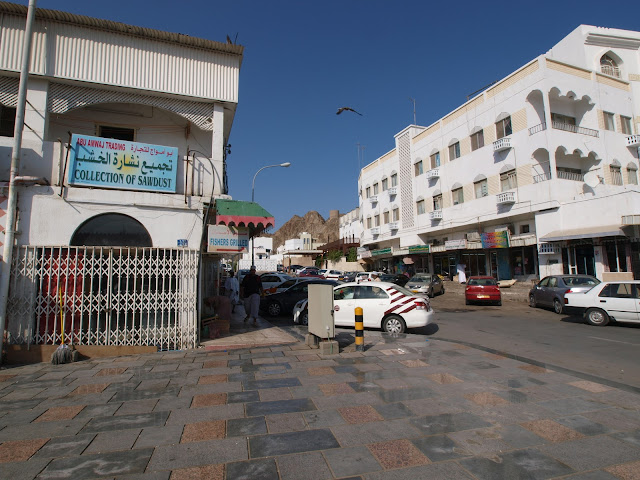 Fishers Grilled..........so they grill fishermen in Oman?  And, they collect sawdust.  I love to read the shop signs and speculate on what might be meant.  Of course, the true meaning is clear, but the English is nevertheless amusing.  The fish market is nearby, so collection of sawdust and preparation of cooked fish are to be expected. In the background you can see a watch tower on the hill top; part of the old fortifications.

Posted by Chuckeroon at 08:56 4 comments 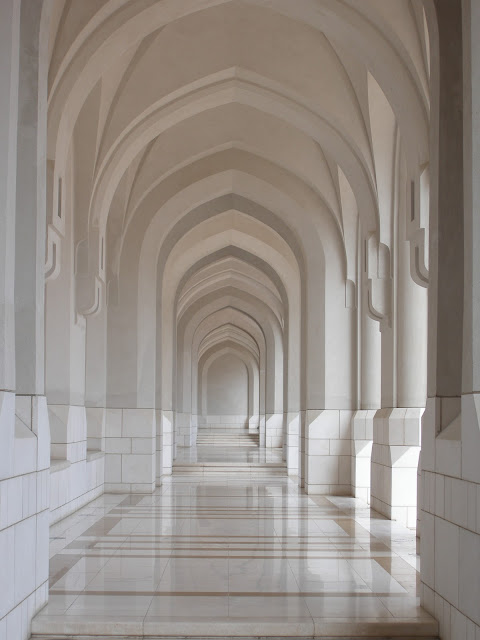 Oh, look! It's another colonade! Sorry, but this one was impossible to resist (I know it's rather a cliche, but.....).   This one is purely decorative and no doubt outrageously expensive, but on a hot day - 50 degrees C - you would love it.  It's part of the Sultan's palace.

Posted by Chuckeroon at 09:48 5 comments 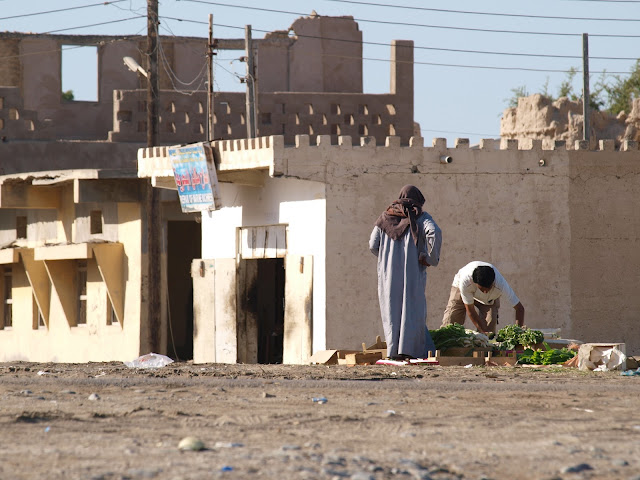 The vegetable trader: early morning on the beach at the tiny fishing village of Al Musanaah, an Indian trader has brought down a van load of fresh green vegetables and he already has a customer.  Behind them is a magical demon's cave...........the marine engine repair shop, as oily and exciting as an engine repair garage anywhere.

Posted by Chuckeroon at 12:58 3 comments 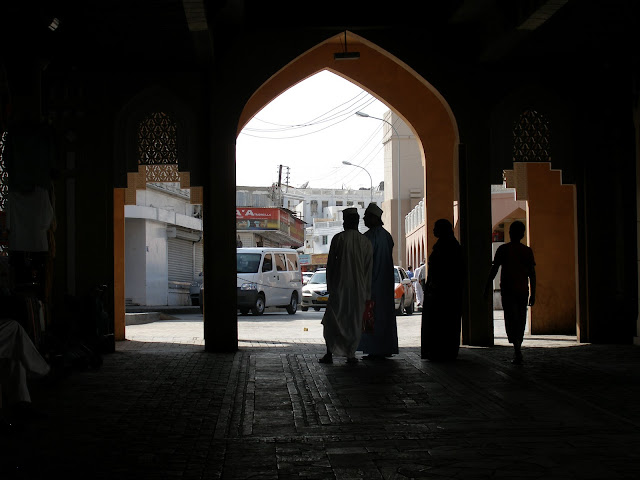 Inside the souk at Mutrah (the port area of Muscat) it is surprisingly cool thanks to old traditional construction methods that naturally encourage ventilation and shade.  It's the original "shopping mall" but without the need for electric air conditioning. Although thick with people, and hot outside, it's fresh and inviting.

Posted by Chuckeroon at 13:12 0 comments 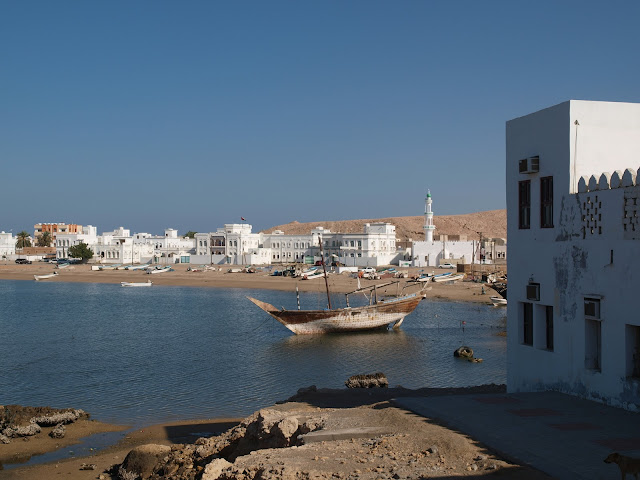 Take pity on Menton DP where the sunshine has disappeared and the grey clouds reign.


Here is the fishermen's beach at Sur, 2/12 hrs south of Muscat.  There is also a dhow construction yard building dhows to the traditonal designs that are still perfect for modern-day cargo trading in the region.

Posted by Chuckeroon at 11:32 3 comments 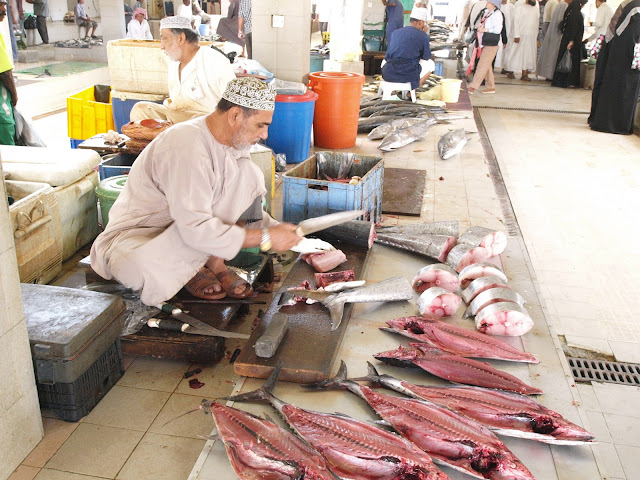 Let's drop into the fish market at Mutrah, the port of Muscat.  As far as I can make out the fish is all caught by the small white skiffs - 4 men with lines or a small net.  Oman is a small country and fish is only eaten in the coastal areas where it is natural food.

Posted by Chuckeroon at 14:52 1 comments 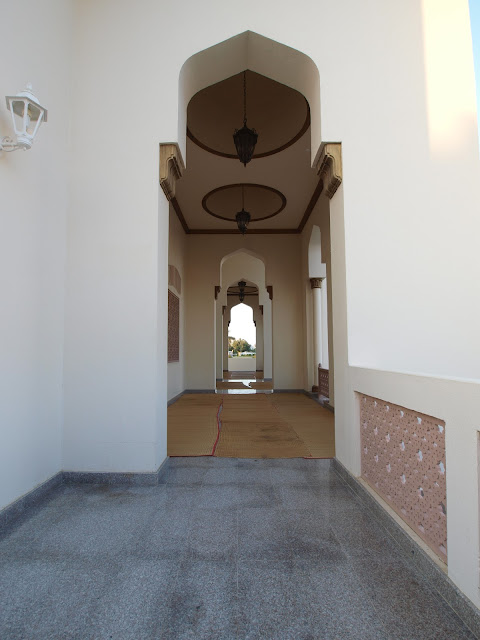 I don't want to bore you with too much "architecture", but I want to show some more colonade studies, and dwell on the pleasing form of the Arabic arch. Here's another very attractive use of the technique at a mosque near where I'm staying.


People shots will be coming again, but mosques and landscapes and townscapes must have their outings as well.

Posted by Chuckeroon at 13:12 3 comments 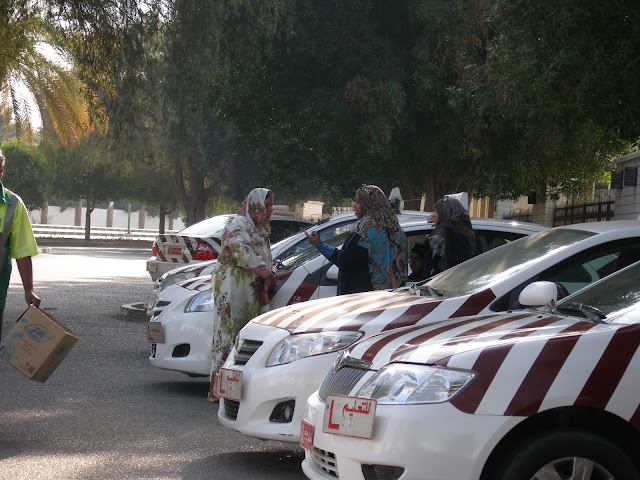 Down at the driving school: two Omani ladies appear to be "sorting out" an Indian lady. Unlike Saudi Arabia, where women are not allowed to drive cars, the Sultan of Oman wishes women to play a full and useful role, reaching their maximum potential in education and work.  Although long dresses (sensible in the extreme heat) are normal, veils are rarely seen in the towns.  Driving school cars carry the distinctive zebra stripes.  Driving standards are OK, but, shall we say "somewhat different" from North European standards - especially at night when young men go crazy and drive expensive, powerful cars in a very dangerous manner.

Posted by Chuckeroon at 11:55 1 comments 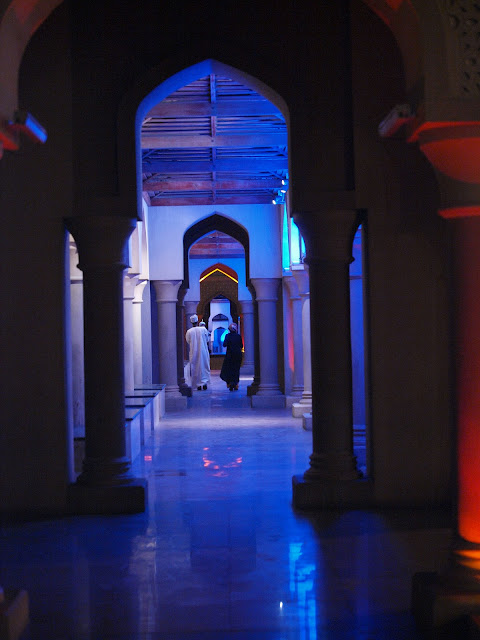 The Arabic arch and the long shady colonade set the scene for this "Happy Families" shot. An Omani family enjoy the cool late night air and are walking the colonade for pleasure. Typically, as far as it seems to me, the Father is carrying the baby, (or happily pushing the buggy). This night shot is hand-held so a bit skew-whiff, but nice nevertheless.  We are down in the old Muscat harbour area known as Mutrah; a fine natural anchorage used for millenia by sea-farers on the Indian and Arabian seas.

Posted by Chuckeroon at 06:28 2 comments 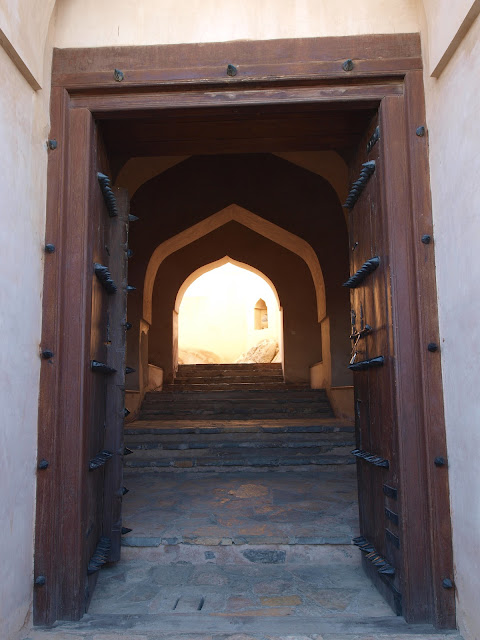 The rather soothing and definitely pleasing form of the Arabic arch leads us forward into the great castle at Nakhal.  Oman is full of forts and strong points, hinting at the turbulent times in its long history. (Not a perfect photo - more of a snap - but as usual the harsh contrasts in light and shade force compromises that would need a full lighting crew to balance out.) After several attempts this was the shot that best captured the effect of the natural light on the arches.

Posted by Chuckeroon at 12:07 3 comments 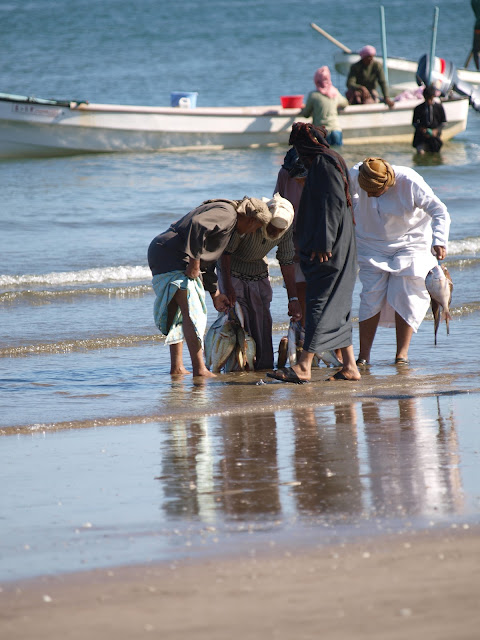 Let's stay with the fishing for a bit longer.  Here you can see the fibre glass skiffs driven by powerful Yamaha outboards.  These have replaced the traditionally build skiffs sewn together with coconut and palm string.

Posted by Chuckeroon at 14:30 3 comments 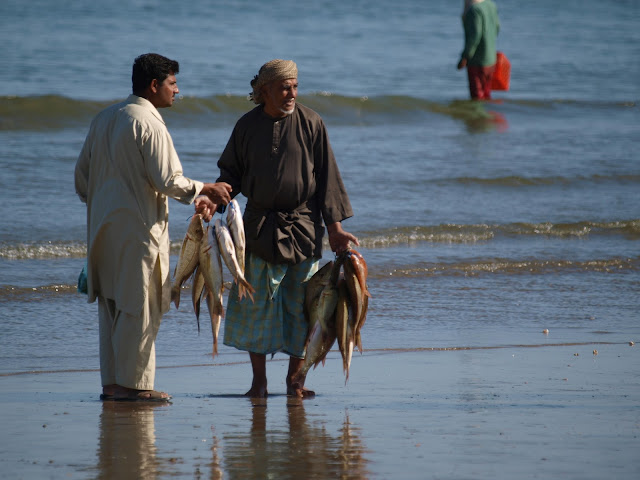 Landing the catch...............an Indian trader discusses the catch with the fisherman who is wearing a typical Omani turban.  The fish will be walked up the beach to the market. The blue Arabian Sea forms the background.

Posted by Chuckeroon at 16:00 3 comments