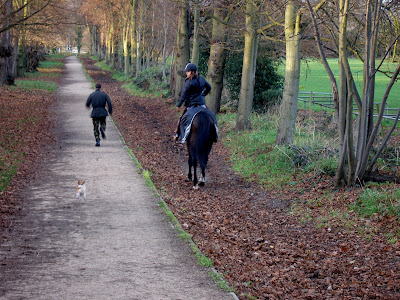 This is a quick snap. I just liked the look of the scene and took a pot shot at it. (Perhaps it's a bit fuzzy?) I was going to call it "Capitalist with lackey and running dog" so as to feed my particular sense of humour. But Heather said I shouldn't, so I thought of "Two people and two animals enjoying each other's company", which is also very much to my line of taste and thinking.

Isn't it a strange thing? In the Cold War time "the lackeys and running dogs" of capitalists were a much maligned breed. Today everyone wants to be a capitalist, or so it might seem. Did the communists lift a stone only to drop it on their own foot?