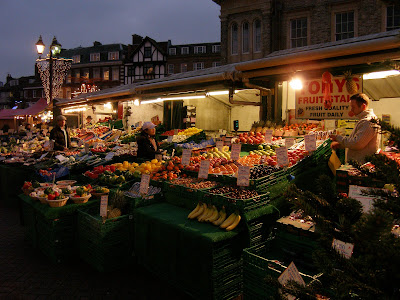 This market stall crammed with exotic and out of season fruit made me think of Joseph Conrad...a remarkable author, famous for "The Heart of Darkness" etc.

At the turn of the 19th/20th C he wrote "The Secret Agent" about anarchists, subversion and bomb making in London. If I remember correctly, he has a scene where a man walks down a London street and the "brilliant gas lamps" pick out the fruit stalls and the exotic fruits displayed. (It could have been written for a film scene, although cinema did not exist).

Reading around, I also discovered that already in the late 19th C the coming of railways ensured that early season fruits could be brought from Uzbekistan into Western Europe, and a lively trade developed long before 1914.

So.....not much has changed in 130 years. Britain is still struggling in Afghanistan, Iraq, and on the edges of "Empire", while at home, London is still the somewhat seedy but magnificent melting pot we all know even today. Shadowy figures play cat and mouse with the police and produce bombs in suburban hide-outs, cook up wicked plots without even giving a hint to their innocent wives, and send innocent children to their death as bomb carriers. At the same time, our market stalls are bursting with exotica from the ends of the earth, transported by the marvels of technology to be "on our table, picked fresh from the vine only a day ago".