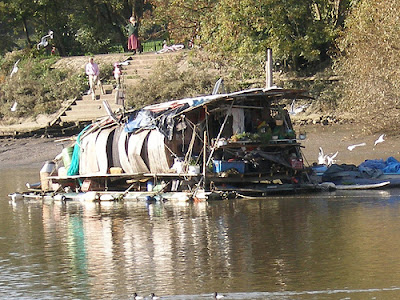 I may be wrong, but memory tells me that this highly respected gentleman has been here for 17 years - or almost, if not more! The raft has evolved over that period. The Port of London Authority tried to sling him off, but local residents campaigned to keep him, so here he stays. He tends the birds, building nesting areas, and is generally regarded as a very good neighbour - the kind of chap you like to have around.

The equipment is quite sophisticated. Originally he had a wind mill to generate electricity but last year I noticed that he has cut out the wind turbine and moved to nuclear power! Look closely and you will see the photovoltaic panel on the far side of the roof.

In the early days it was fun to watch the raft "morphing" into new shapes, and seeing experiments in protective cladding systems being tried and rejected. Today the form seems to be more or less fixed and final. This is human resourcefulness at it's peak. In my opinion it's a noteworthy sight for genuine tourists .