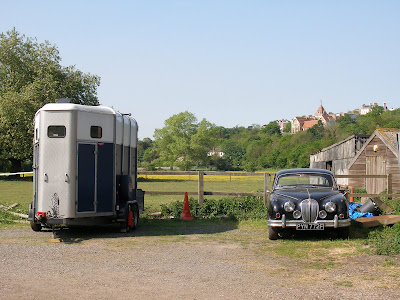 I have in mind those "nostalgia images" that show an old split-windscreen-1940s-style
Dodge pick-up, rusty but serviceable, beside a decaying barn out in the flatlands of Kansas. Why do those 1940s American pick-ups say so much to our imaginations? (Or is it just my imagination? I don't think so.)

So, I'm asking: What does a 1970 Jaguar standing in tatty elegance beside a private horse trailer in a yard with a cute little buttercup meadow behind do to the American imagination?

I suspect it says that we all harbour dreams about an idealised Past that probably never existed. But whatever you think, you cannot deny that the styling of the Jaguar has a timeless elegance.