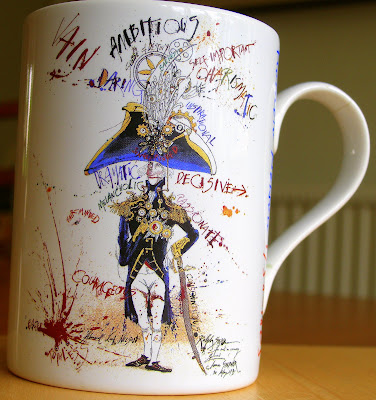 Those of you who want to read more about the River Raft Squatter featured yesterday can try this URL link. If it does not work, tell me, and I will help you out.

http://www.richmondandtwickenhamtimes.co.uk/search/display.var.269433.0.river_recluses_home_is_an_eyesore_say_neighbours.php
Now let's move on to the Saturday "Mug Feature". This mug is MINE, exclusively and absolutely. Nobody is allowed to touch it - ever. It celebrates Horatio, Admiral Lord Nelson. He's a hero because he made his men feel good about themselves, and although he took them into great danger, because of his aggressive tactics, they felt safe with him because he was always a winner. He also had enormous physical and mental courage, and his men would see him exposed to danger as they were. He was also a fine dresser and if around today would probably have been found driving a flashy car. Those meeting him for the first time might have no idea that he was a heavy-weight hero, but on closer acquaintance his high mental ability became obvious. He was a lady's man - but in the right way.