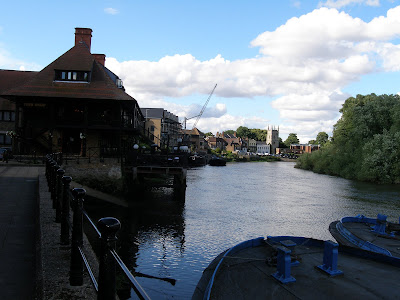 Karl's ferry will take him from the Richmond side and land him at the foot of the church tower in the distance. The construction cranes are today building new apartments on the site of a large water-powered flour mill that stood there from the 16th century until 1941. In 1782 Karl would probably have noticed numbers of large grain barges tied alongside.

For those interested: my research is based on the British Ordnance Survey map 1816-1822, plus careful reading of Karl Moritz's letters, visits to the local museum, and research on the local system of small rivers. I have recently found some misinterpretations and will correct those later. For the time being we should keep up the momentum. The Richmond/Kew/ Hounslow area is closely associated with the early history of official map-making thanks to George III's enthusiastic cooperation with the French Government. The French asked Britain to help with the survey of the English Channel coastal area in 1783. For once, Britain and France were (briefly) at peace. Unfortunately, by 1790 we were again fighting. In 1791 Britain started the official "Ordnance Survey" map making process, allegedly as a direct result of the earlier French initiative in cooperation. We can all be grateful to those men of science who undertook that initiative to cooperate.