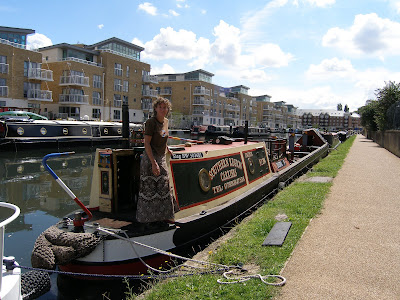 Between 1805 and the 1930s Brentford Dock was an inland port at the point where the Grand Union Canal enters the Thames. Today the canal basin is surrounded by luxury apartments, but the waterborne life style continues. The "narrow boat" in the photo really is long and narrow, because the English canal system was developed that way. The topography, the early age of the industrial revolution, and the construction methods forced that upon us.

She covers the system from Brentford, through "Little Venice" (Paddington, London) to Limehouse in the East of London and then up the River Lea canal system to Hertford, serving all the barge moorings. I never knew anything like this existed today. It was a pleasing discovery.