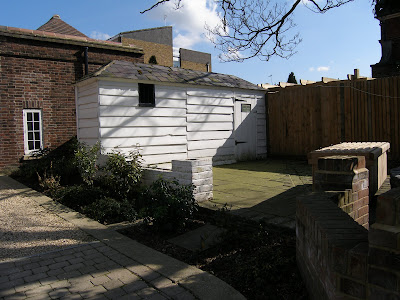 Whizz past in your car and you will not notice this tiny wooden shed 10 meters back from the road side. Walk past and you will assume it's an old garden shed in an odd position. (The building behind is younger - but not much - and was a blacksmith's forge.)

This white hut is an ancient police station built in the 1780s. There are only two of these left in England. It is the Petersham Pound and Lockup, where criminal vagrants and straying cattle would be kept awaiting the attention of "higher authority".

The constable was armed and paid for by the local magistrates. The last serious incident was in the mid 19th Century when a carter, up to no good with smuggled goods, tried to make a run for it and was shot dead. A court case then took place to assess whether or not the killing was lawful.

This little survivor from the past is listed by "English Heritage" as a "building at risk". Read more here: http://www.english-heritage.org.uk/server/show/ConBar.4343

Type TW10 7AD into Google Earth and see where is on the Petersham Road A307.