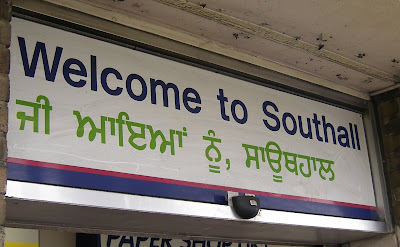 Back in August I wanted to feature the celebrations of 60 years of Independence for India and Pakistan. I lost the photos in a computer accident and have been unable to recover them.

So, here is my belated tribute to India and Pakistan via a new set of photos. The weather was a bit grey but nevertheless I still captured the colour of Southall.

Southall is a town in the western suburbs of London, close to Heathrow Airport where the population is, as far as one can tell, almost 100% Punjabi. As an Englishman, walking down the street gives you the feeling you are in Amritsar, not London.

As you can see, even the railway station has a sign written in an Indian script.