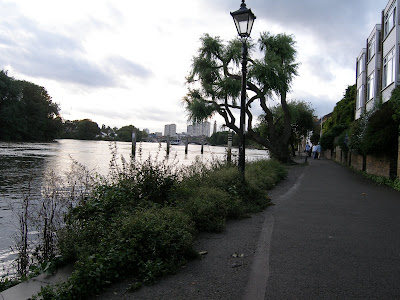 There's a lot to see when you look towards Kew Bridge from Strand on the Green.

The Strand settlement itself is ancient, and was always a convenient spot for shipping and crossing the river.

We can see Kew bridge, first built in 1759 and twice renewed; just beyond that, some modern offices and apartments built on cleared industrial land. The tall tower is an important Victorian water pumping and treatment site built as part of the mighty sewerage and water system of the nation's Capitol. It houses huge steam engines and is now a pumping engine museum. Beyond that we see the tower blocks of Brentford, built to replace dwellings lost during war time bombing (Brentford was an industrial area). And just beyond the tower blocks, but out of sight, are the "iconic" 1930s buildings of the "Golden Mile" described in earlier posts.