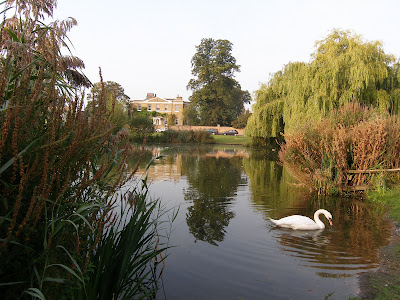 A few weeks ago I showed this view in the fog: http://richmonduponthamesdailyphoto.blogspot.com/2007/08/ham-pond-and-gordon-house-in-fog-210.html

The important thing about this shot is the swan.

For several years two swans occupied the pond and reared successfully reared their young. Last year a fierce dog killed the mother swan and some cygnets. The father reared the remaining cygnets single handed, taught them to fly, and remained alone unable to attract a new mate. He pined away and died early this Summer. The pond remained empty.

Suddenly a new swan has appeared to occupy the vacant pond. Here he is. He has been around for several weeks and hopefully he will attract a mate, and so next year we will have swans on the pond again......