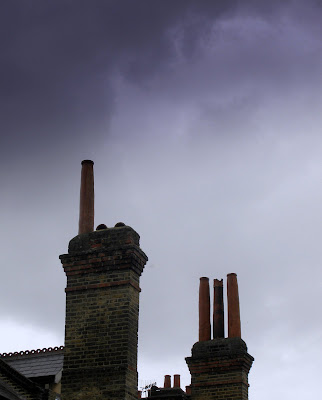 This isn't smoke (it's an amazing rain cloud I snapped in May - and yes, I got a bit wet).

But, it could have been smoke. Growing up in the 1950s I actually remember smoking chimneys, the smell of coal, the heavy pong of low grade petrol in the air (which I rather liked!) and the Great Smog of December 1952 which led to the introduction of the Clean Air Act. Following that Act the levels of sunlight registered in our industrial cities leapt by 20% - if my memory is correct.

My father, if alive, would have become 100yrs old last week. I've been thinking about him and reflecting on what has changed and what has not. The attached URL http://www.metoffice.gov.uk/education/secondary/students/smog.html indicates that the Meteorological Office, set up in 1900, immediately started to examine the problem, but it took 52 years before "somebody did something" - the problem being that until then we did not have the technology. At this point I remember that Britain was the first country in the world to build a nuclear power station, with engineers saying "energy would be so cheap we would not need to meter it"! And of course the energy was CLEAN.