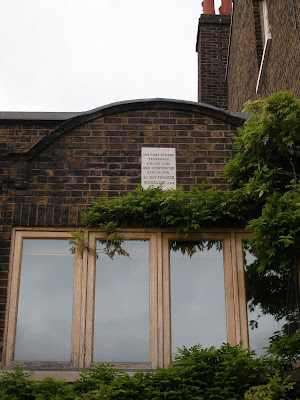 In 1782 there were no bridges across the Thames between London Bridge and Kingston. So we must set off to discover the ferry point. Karl mentions seeing the many "fine houses" of upper class gentlemen along the way out of Hammersmith so I started on the narrow road close to the river.
As well as the many "fine houses" (which you we will see later) I discovered this amazing plaque on a wall of one such house. At this spot in 1816 the very first electric telegraph was opened and the line ran for 8 miles - no doubt into the centre of London. I had not idea that the electric telegraph started so early.
Even more amazing is the fact that by 1880 Britain had laid 97,568 miles of cable, nearly all underwater, to link it with India, Canada, Australia, Africa, America, the Middle East, China, and the Pacific.