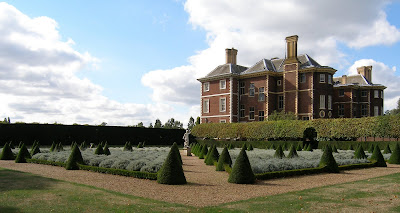 Only another 300 yards or so as the crow flies, and Karl stops to admire Ham House, standing on its natural hump, raised slightly (but safely enough) above the river bank level. The master builder seems to have been perfectly aware of flood risk, topography and excellent practice in the daring but ultimately safe siting of an important house so close to the river. The same goes for its neighbour, Douglas House, seen yesterday.

(This is an archived shot from last year. Right now the lawns are much greener, on account of the excessive rainfall).

Built in 1610, Ham House was at the centre of politics throughout the Civil War and the Restoration. Only "first rate Big Hitters"....both men and women....were entertained here.

By 1782 things had subsided somewhat to the the level of the Duke writing to his son asking why he needed yet more money to fund him on "the Grand Tour" of the continent of Europe, and "wasn't the modest allowance enough?"

On a domestic note (and let's not forget that Karl became a professor in the field of aesthetics), I am struck by the influence of this design on the "British 1930s suburban semi-detached villa". It has the typical bay window, the classic English brickwork; the same roof line and so on. I look at it every day and think how "homely" it is, although its history is one of hosting the nation's most powerful people and contributing to Richmond's current fortunate status.

From what I know, it is highly likely that Karl Moritz saw this view exactly as we see it here.

(The Moritz tour will continue, but I confess that right now the excessive rain and dark clouds are hampering my efforts and my intentions).