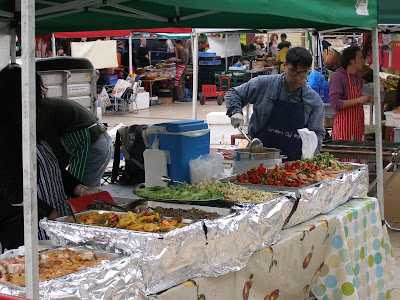 For new comers this is the third Karl Moritz episode. This is going to be a long, and I hope engaging journey.

We're still wandering around the little market in Hammersmith, but keeping our eye on the coach which will soon speed off again towards Richmond.

Karl drags me over, excitedly, to the stall selling Philipino take away. He's never seen that before!

I am reminded that the discovery of the Indies meant that tea, sugar and coffee arrived, and also spices. The British went mad for them - in fact "consumerism" was alive and well in London. Not only sugar and coffee from the west indies, but also very high quality textiles from India were highly sought after and very affordable. Contemporary reports tell how every servant girl and "low type" in London would dress up in finery....."plain country Joan is now turned into a fine London madam.....can carry herself as high as the best.......her poor scanty petticoat is changed into a good silk one...five yards wide at least" Daniel Defoe. One commentator complained that it was impossible to tell a gentleman from his servant.