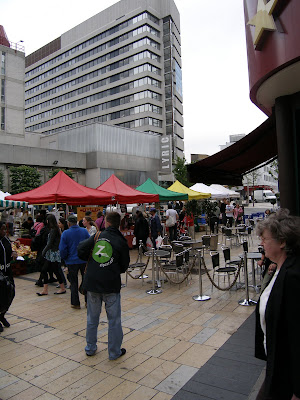 We're rattling along with Karl Moritz in the regular stage coach, picking up and setting down passengers along the 10 mile journey from central London to Richmond. Karl admires the houses of Kensington (as indeed we do today - many owned by very rich Arabs and Russians) and he passes through thriving Hammersmith.

Hammersmith is a centre of the media and film trade in London. It was (in my opinion, appallingly) rebuilt in the 1960s. British 1960s architecture suffered from a streak of "brutalism" that in my opinion does not go well with the often grey or "white" skies of a bad day in London. It adds to the depression.

Fortunately, the cafe and street market "revolution" of the early 21st century London scene, together with a newly discovered zest for the use of gay and vibrant colour have relieved some of the horror. Karl noticed Hammersmith as he rushed through. He would notice it today for the noise, the brutal 1960s architecture, the degraded late 19th century areas, the frenetic mass of motor traffic, the tourists and the "melting pot" ethnic mix that is modern London.

Karl! Hammersmith is still noticeable, but Boy oh Boy, it "does your head in". It sure ain't pretty anymore.