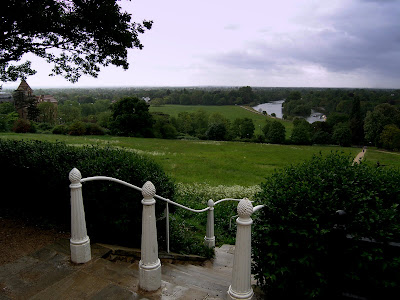 (some readers have made special requests which are noted and will be handled as "off piste" extras in due course).

So, Karl rises very early to catch the sunrise over "the view" from Richmond Hill. We then have a piece of comedy in his letter where he describes his total frustration being locked into the inn and unable to rush out for about 2 hours. He laments the "late rising" of the English inn staff. Arriving on the hill he is greeted by cloud, and deeply disappointed. But, in spite of the cloud, this picture looks good to me.

This photo is therefore pretty well the sort of snap that Karl would have taken. The white building down among the trees was already there forty years before Karl came. The hotel, built in 1865, more or less replaces other buildings he would have seen on the spot in 1782.

But, OH SHOCK AND HORROR....a Victorian business man, who owned the island in the river, proposed putting up huge advertising hoardings in 1898 to catch the eyes of the visitors on the hill! This was the last straw, and the movement to protect the view gained strength, forcing the Act of Parliament in 1902.