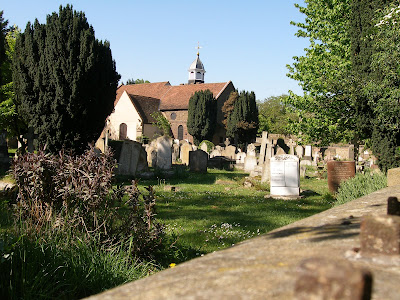 I'm imagining that Karl Moritz probably spent his morning in Richmond exploring the villages of Petersham and Ham. So you'll get the benefit of seeing what he probably saw but did not write about. (Although Daniel Defoe did write about it in his "A tour through the whole of the island of Great Britain").

If Karl Moritz had walked directly down the slope of the meadow towards the white house (Petersham Lodge) he would have come first to St. Peter's church. Here you can see the church with it's early 18th century "new building": a christian church had already been here for about 1,000 years before even Karl Moritz arrived.