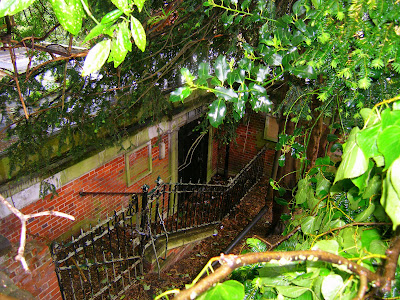 This is something that puzzles and annoys me. It's a derelict municipal toilet, built to a high standard in the 1930s and now derelict. It's typical of such facilities in towns all over Britain.

In the 1890s the (often laughed at) Victorians built magnificent public facilities and we continued to do this until the 1930s. In the 1970s these facilities were allowed to decay and the Nation gave up the battle against vandals and pleaded "poverty" in the face of rising costs.

Councils have claimed to be "in Partnership" with pubs, cafes and shops to provide toilets; but, in my opinion, this does not fill the gap.

Why is it that all over Europe we are suffering more and more vandalism, violence and public destruction at a time when we were never more wealthy, never had better education opportunity, better healthcare, better more comprehensive legislation on human rights, greater resources to help the disadvantaged? Have I missed something? Am I deluded? I certainly am concerned.

P.S. ......the world's most magnificent public toilet was built at Rothesay on the River Clyde (I hope I'm right - but I lost the post card photo) near Glasgow in the 1890s. It is stunningly well made, and a temple to public spirit, and the combination of art and engineering excellence and social optimism. Yet it too was allowed to decay until recently an enlightened authority rescued and restored it. Believe me, it's an amazing sight of copper, iron, brass, ceramic and glass.