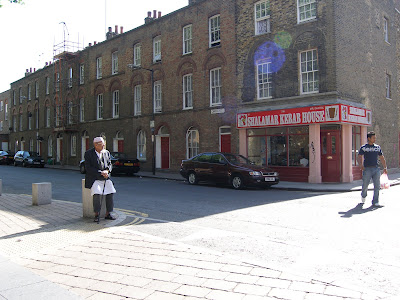 (Apologies to Ham of London CDP).......This is a picture of Cavell St. in Stepney, in the East End of London, taken in Summer 2006. If you imagine Richmond upon Thames as an Outer London town at 8 on the clock face, the Inner London Borough of Stepney sits at 2, and is actually part of London itself.


The picture is worth looking at because it shows what the East End of London looked like in the 19th C when Stepney was an area close to the great harbour area known as the "Pool of London". The quality of the houses suggests that this was an area for well paid City clerks and skilled men doing well (I'm only guessing). Today, the docks and ships have moved a long way down river, immigrants from Bangladesh and other Asian areas have moved in (following Huguenots http://www.oldbaileyonline.org/history/communities/huguenot.html in 1680, Jews, Italians, Chinese - you name it) and the area is still also inhabited by City clerks and skilled men doing well.


This area was severely bombed during WW II and many of these streets were totally wiped out. Cavell St. obviously survived.