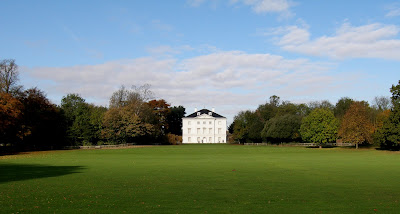 Marble Hill House sits on the Twickenham bank of the river, immediately opposite Ham House and beside Hammerton's Ferry (featured in an earlier posting "the 500 year long queue" http://richmonduponthamesdailyphoto.blogspot.com/2007/02/500-yr-long-queue-5.html ).

Built in 1720 in the Palladian style by George II for his Mistress Henrietta Howard, the house was a centre for high-tone social and literary gatherings (as you would expect!). Its park forms part of the unique heritage that is known as "The view from Richmond Hill".

Around 1900 the wealthy owners wanted to demolish the house and build suburban villas with riverside amenities across the whole park (one's blood runs cold). A public outcry ensued, public subscriptions were raised to buy the site and the land was placed into public ownership. If Karl Moritz - and of course many, many other more relevant people - had not written about, admired and painted the view from Richmond Hill, then the battle to save it would have been much harder.

Imagine! Had the houses been built, Karl Moritz's much admired view from Richmond Hill would have been totally destroyed by a sea of Edwardian villas. Karl would indeed have wept.