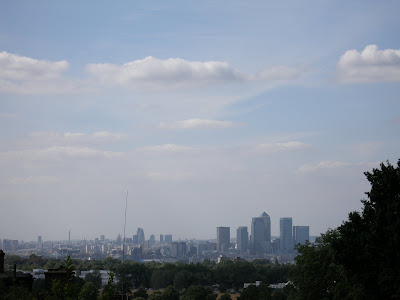 Ham, of London Daily Photo will forgive me for stepping sideways. This is the view of London today from the gun site where my father served in WW II.......Shooters' Hill near Erith, Kent. It's about 30 miles east of Richmond.

Looking west-north-west the whole of London lies before you. The tall towers nearest are the new (less then 20yrs old) Canary Wharf financial district, built on what was then, in 1940, a vast complex of commercial sea docks and factories (the so-called East End). To the left of Canary Wharf, in the centre of the picture are the '60s and '70s towers of the older, original financial district of the City of London, and beyond, on the left edge, is the so-called West End, home of the Crown, Parliament, Civil Service and Theatre Land (perhaps in that order, too, or maybe the reverse?). We can see how London has transformed and how the "hardware" of industry and commerce has moved elsewhere, but the "knowledge and software" have stayed. In fact, this photo should be a 360 degree panorama, so as to explain it all.

Last Summer I visited the old gun site (for the first time ever) and saw the size, scale and strategic importance. The view is fantastic - 360 degrees panoramic from high up. Today it is a golf course, and all that remains of Britain's largest and most powerful anti-aircraft gun site is a small lump of rubble that was the foundation of the radar gunnery control centre.

My father experienced considerable danger on "bad nights" and came home deaf in the morning. He was one of the kindest and nicest men you could ever know.